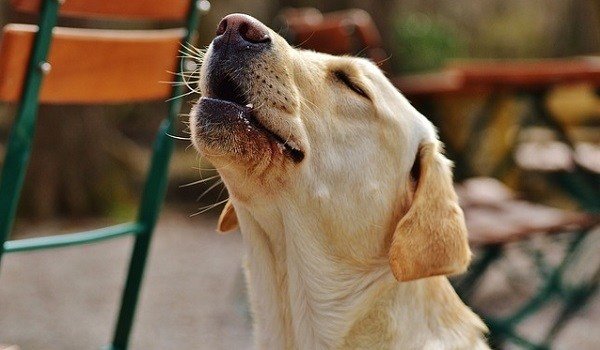 How To Stop Your Dog Howling

If so, this guide will shed some light on the problem and explain why this may be occurring, and what you can do to ultimately overcome the issue.

A howling dog can cause all kinds of problems in your life – especially when it’s happening while you’re outside of the house.

Not to mention the potential boredom and loneliness your dog may be experiencing during these times – which is quite likely if your dog is howling quite often.

So let’s begin by taking a closer look at what causes a dog to howl in the first place.

Why Do Dogs Howl?

One of the most common reasons why your dog might howl is simply due to separation anxiety and loneliness.

This will usually be the case if it’s happening when you’re out of the house. While this is the most common cause, dogs can also howl due to something disturbing them in the environment, or to attract attention to themselves and alert other dogs in the area of their presence.

Additionally, certain high-pitched sounds and frequencies can disturb your dog and cause them to howl. What’s more, many dogs will howl at sirens from emergency vehicles passing by your home.

Is Your Dog In Pain?

While it’s less likely, it’s worth noting that a dog may also howl when they’re in pain or when they’re sick.

If they’re howling even when they aren’t alone (to rule out separation anxiety as the primary cause) then it’s wise to take him to a vet, just to make sure there isn’t any injury or sickness that can be causing the howling behavior.

If your dog is howling, and you’ve ruled everything else out, you’re probably dealing with a case of separation anxiety. In fact, this is often the most common reason for a howling issue.

If your dog is being left alone for long periods of time during the day, then it’s natural for them to feel lonely. After all, dogs are social animals, and they like to feel included. When they feel like they’ve been abandoned, it’s natural for stress and anxiety to occur – so even though the problem can be frustrating, it’s important to not feel angry at your dog if you can help it. Instead, try to have some sympathy with your dog’s predicament.

However, to be sure that it’s separation anxiety you’re dealing with, it’s worth checking for other telltale signs. Is your dog pacing around the room when left alone? Is your dog breaking things and generally acting destructively? These types of behaviors are commonly linked with anxiety, too. So when multiple signs are present, you can rest assured that it’s probably separation anxiety you’re dealing with.

Spend More Time With Your Dog

If you have a busy work life that keeps you out of the house it can be difficult for your dog to cope with the isolation. It’s important to spend as much time with your dog as you can, so he feels that he’s included in your life, and not excluded or neglected.

A dog that’s howling is usually craving social interaction, so above all, this is something you need to provide when you can.

Teach Your Dog That You’ll Be Coming Back!

One way to get your dog more comfortable spending some time alone without howling is to gradually train them to be calm while you’re not around.

This could mean leaving them alone for a few minutes, while gradually increasing the period of time that you’re away. Start small at first, but let the periods of time grow longer after awhile.

The key is to find a balance where your dog doesn’t become too anxious, and still generally feels comfortable even when you’re not there.

A big part of overcoming this issue will be letting your dog learn that you’ll be coming back and that they haven’t been abandoned forever.

The activity of howling takes a lot of energy to maintain. If you keep your dog tired with physical activity then they’ll find it much harder to keep up with the howling.

While this isn’t a long-term solution (it’s better to address his loneliness by giving social interaction if you can) it’s certainly an effective way to reduce the amount of howling that’s happening (which could also be causing issues with your neighbors by now).

If it’s not possible for you to spend more time with your dog because you have to work long hours, it may be worth hiring a dog walker to give your dog some activity in the day.

Not only does this give your dog some enjoyable exercise, but it also provides additional social interaction with a person (and possibly other dogs) which can really help to greatly alleviate your dog’s feelings of loneliness or isolation.

There are also a few useful tricks you can use to give your dog some extra comfort whenever you’re not there. Some owners choose to leave an old t-shirt which smells like them with their dog, and this can give some comfort and reassurance that you’ll be coming back.

You can also leave a radio on to provide some extra sound and distraction. Some dogs respond well to this, although for others it can make little difference, either way, it’s worth a try. However, some forms of radio and TV can cause audio fatigue for your dog – so be careful about the content you choose. Subscribing to a channel like Dog TV (which makes content specifically to relax dogs) can be a fantastic idea for a bored or lonely dog.

How To Speak Your Dog’s Language