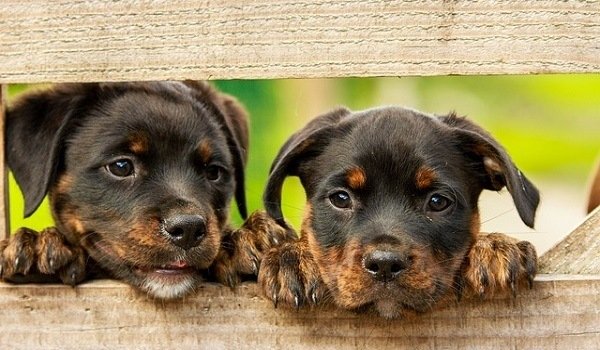 What To Do About Rivalry Between Dogs

Do you have two (or more) dogs that have rivalry and jealousy issues?

If so, this guide will explain some of the reasons why this type of behavior can develop, as well as showing you what you can do about it.

By the time you’ve finished reading, you should know how to reduce this type of behavior before it escalates too far or causes bigger problems – so let’s get straight to it.

If you have more than one dog, then you may have already realized how dogs can become jealous of each other over certain things.

In most cases, jealousy and rivalry usually occur in dogs of the same sex, age, and size. Your dogs could become jealous over bones, toys, where they sleep, or even just over your attention!

To Each Their Own

The first step is to make sure your dog’s don’t have to share anything that can cause fights or jealousy.

If you’re making your dog share any of these things, then you’re asking for jealousy and rivalry issues – because these two things, in particular, are very important to each dog, and they will be competitive with them if you’re asking them to share.

Dominant breeds of dog often have much more rivalry than other breeds, and this can be made even stronger if they siblings as well.

Sometimes the only solution is to neuter the “underdog” so there is less rivalry and competition between each other because otherwise, they will continue to challenge each other for the leadership position.

Additionally, if you notice one dog is particularly dominant, you’ll need to match their hierarchy, and give them the food bowl first – otherwise, they are likely to fight. It’s also important to show this dog attention first.

Some of the most common things for siblings to compete and get jealous over are things which are unique or can’t be shared so easily. This could mean certain toys and treats, most of the time.

You can avoid these potential problems by keeping your dogs in separate rooms when you’ve given them something unique, or you can simply opt to not give either any preferential treatment or unique items.

You can reduce certain aspects of rivalry by feeding your dogs together, but making them face opposite directions to each other is also beneficial.

This means they’re both being fed at the same time, but they don’t have to look at each other, which is one of the first ways that jealousy escalates.

Remember: If one of your dogs is clearly more dominant than the other, you should always put the dominant dog’s bowl first.

If you are clear on which dog is the most dominant between the two, you should always greet the dominant one first, as well. A dominant dog will have less need to feel jealous if you do this, so it may very well cut down on the disputes between the two dogs.

If you can notice their natural hierarchy and go along with it, you may be able to reduce a lot of the symptoms in many cases.