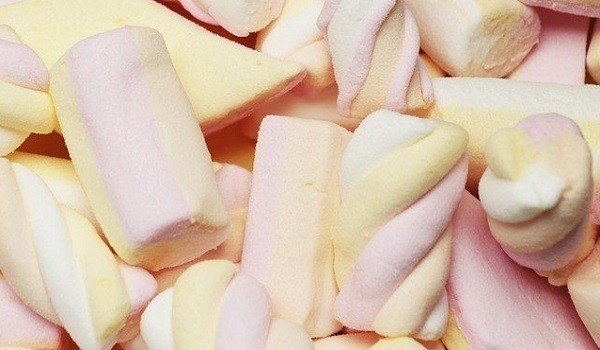 If you’re trying to find healthy treats for your dog, then it’s safe to say that marshmallows probably aren’t at the top of your list!

However, you may be wondering whether marshmallows are likely to cause your dog any harm, so in this guide, we’re going to give you the key facts you’ll need to know.

What Are Marshmallows Made From?

Even though the ingredients commonly found in marshmallows can vary from product to product, you’ll generally see similar ingredients that include corn syrup, gelatin, sugar, cornstarch, dextrose, water, as well as a whole host of artificial colorings and flavorings.

The biggest danger here will likely be sugar, which similar to humans, can be a bad ingredient for a dog to consume, especially in any great quantity.

However, something that’s often found in sugar-free marshmallows is Xylitol, which is an artificial sweetener that can be very dangerous to a dog’s health, particularly if it’s consumed in larger quantities.

In fact, some vets speculate that Xylitol is far more hazardous to a dog than chocolate, but even though most owners are aware of the dangers that chocolate poses, fewer people know about the dangers of Xylitol.

If your marshmallows contain Xylitol, then it’ll be important to keep them away from your dog and to make sure you don’t share them with your pooch.

Should You Give Marshmallows To Your Dog?

If you’re eating marshmallows in front of your dog, then there’s certainly a chance that they may beg you to share your treats or at least give you those puppy dog eyes. Furthermore, they may be happy to chomp away on these marshmallows if you share one, even if they aren’t good for your dog.

But even if you feel guilty for enjoying a tasty marshmallow without sharing, it’s best to avoid sharing marshmallows with your dog due to the potential health risks.

Some dogs may certainly seem to enjoy eating marshmallows due to the unique texture and flavor they have, but this alone isn’t a good reason for a dog to eat them.

While marshmallows are unlikely to cause any issue it tiny quantities, the sugar can still cause them diarrhea and bloating, and the artificial sweeteners like Xylitol can be dangerous in high quantities.

So even though your dog will likely be fine if they manage to steal a single marshmallow from the floor, it’s not a good idea to make a habit of it.

Another question that may concern you is whether it’s okay for puppies to eat marshmallows. A puppy is likely to be very curious about anything you’re eating, especially when they’re still exploring and discovering the world around them.

But puppies have very specific dietary needs during each stage of their development, and the ingredients found in marshmallows are only going to be detrimental to their health, so it’s not a good idea to give marshmallows to a puppy.

Are There Any Benefits?

Now, despite the obvious risks and downsides to giving your dog marshmallows, there are still some vitamins and minerals that can be beneficial to their health. For example, some marshmallows will contain iron, copper, and selenium, as well as modest amounts of protein and fat.

Of course, this doesn’t necessarily mean that marshmallows are the best way for your dog to consume them! Overall, the excess of sugar poses a risk of diabetes and obesity, as well as the potential for tooth decay and stomach issues.

My Dog Ate Too Many Marshmallows – What Should I Do?

If your dog has managed to get hold of a bag of marshmallows and eaten them all, then it’s wise to check the ingredient label first to see what you’re dealing with. If the nutritional label shows mostly sugar, gelatin, and cornstarch then you may not have anything to worry about if it’s just a handful of marshmallows or just the one time. But you could still see some diarrhea and bloating.

However, if the marshmallows come with Xylitol or artificial flavorings and sweeteners, then you may need to call a pet poison control hotline, especially if you’re noticing any unusual behavior.

You’ll need to have the nutritional label available so you can detail the ingredients to the hotline, and they’ll be able to let you know which ingredients are likely to be toxic to your dog.

There are various signs of Xylitol poisoning that you should look for, such as vomiting, lethargy, and general weakness. Your dog may also have some difficulty with coordination, and in the most severe cases, comas and seizures could occur.

Other potential symptoms of poisoning can include diarrhea, bloat, or constipation, which can also be caused by excess sugar as well as sweeteners.

It goes without saying that if you’re concerned about your dog’s behavior after eating something they shouldn’t, then it’s best to consult your vet and have your dog checked over.

Now, it’s clear to see that marshmallows are never going to be considered a healthy treat to give to your dog, but there’s nothing stopping you from buying your dog their very own treats to enjoy while you save the marshmallows for yourself!

Ultimately, keeping the marshmallows for you and giving your dog their very own treats is the best solution if your dog keeps giving you the puppy dog eyes and makes you feel guilty for not sharing.

Here’s a selection of high-quality dog treats that are safe, healthy, and sure to be loved by your dog.

What Are The Best Dog DNA Tests On The Market?

Do Dogs Have Belly Buttons?

Can Dogs Eat Pork? Or Is Pork Bad For Dogs?