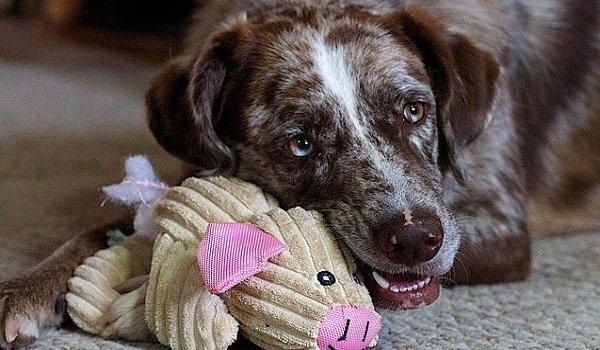 What Are The Best Dog Squeak Toys?

If you’re looking for a fun and engaging toy that’s sure to keep your dog or puppy occupied, look no further than the humble squeak toy.

While these toys are infamous for the noise they make, there’s no denying how thrilling they can be for some dogs – especially puppies.

In this guide, we’re going to list several of the top squeak toys money can buy, so you’ll be sure to find something that your dog will fall in love with. So let’s take a look!

Our first selection is this fun and affordable squeak toy from Kong, who is one of our all-time favorite dog toy manufacturers.

These super-affordable toys come in a variety of interesting animal designs, which include everything from monkeys and alligators to elephants, mooses, and more.

Despite the cheap price, these toys are surprisingly resilient to general wear and tear, and most puppies will struggle to destroy them. However, it’s important to keep in mind that strong, aggressive chewers could make light work of this toy.

But with that said, the toys do come with an additional material layer to boost their strength, and there’s a minimum of internal filling – so if it does break, there won’t be too much mess to tidy up!

This large toy set is a very popular option that comes in several sizes, along with 3 squeaky squirrels and a long-lasting tree trunk that’s plush to the touch. Additionally, the squirrels are very well constructed and entertaining for your dog to play with.

The unique design offered by this set gives you lots of room to play invent your own games, such as playing hide and seek with the squirrels in different holes of the tree trunk – so you’ll definitely get a lot of ‘play time’ out of this set. When you combine this with its affordable price, this option from Outward Hound is a guaranteed winner.

Here’s another fun toy from Outward Hound which consists of 16 separate squeaker – so you’ll need to be prepared for the noise!

However, this is sure to entertain most puppies, who will quickly find this to be their favorite toy of all.

The design comes in a variety of animal forms, allowing you to choose from a mallard, gator, cow, or dog. The long, floppy bodies combined with the multiple squeaker arrangements is definitely unusual, but it’s a design most dogs seem to greatly enjoy.

Overall, this option is yet another great dog toy from the Outward Hound brand.

This simple and affordable squeak toy comes in the form of a hedgehog, along with a variety of sizes ranging from large to ‘junior’.

The design is fairly minimalist, but it creates a variety of squeaks, grunts, and rattles that are sure to keep most dogs and puppies entertained for quite some time.

Overall, it’s a definite hit with most dog owners.

Here’s another toy from Kong, coming in either a small or a large size – and using an interesting beaver design.

One of the perks associated with this toy is the removable squeaker, which means you can give yourself some peace and quiet from time to time – while still letting your dog play with his new favorite toy.

What’s more, the toy comes with four replacement speakers – so you’ll always have a backup in the case of one becoming lost or broken during a play session.

It’s also worth noting that this toy is rather long, coming in at 15 inches from tail to head.

This toy from Multi Pet comes with a fantastic cow design, that almost looks like a pig. But regardless of the design quirks, this is another fantastic squeaker toy that many dogs love to play with.

It makes ‘real life’ sounds, and has a wonderful plush texture that makes it very comfortable for your dog to enjoy.

It’s worth noting that there’s a variety of similar toys in Multi Pet’s ‘Look Who’s Talking’ range – which includes a frog, chimp, chicken, rooster, and many more – so they can be quite fun to collect, too!

This ‘stick-like’ toy from Kong has long been a popular favorite, and it’s certainly a good option for many dogs.

It’s a very ‘easy-to-squeak’ toy, but the squeaker is actually very well protected inside, so it’s quite good for a dog that’s prone to a little chewing.

What’s more, the toy is constructed from a non-toxic, durable material that should last for a good length of time – and it’s also suitable for larger dog breeds as well.

However, it’s important to keep in mind that this isn’t strictly a ‘chew’ toy – so many dogs may be able to destroy it if left to their own devices for too long.

Here’s another interesting toy from Kong, which comes in the shape of a green frog.

In general, this toy is best suited to smaller breeds and puppies, because it won’t last too long in the powerful jaws of a bigger dog.

The inner lining of the toy holds the squeaker in a convenient pouch, which means you can quickly and easily remove the squeaker whenever you need to – and it’s also possible to replace the squeaker entirely, in the event that it comes broken.

There’s also no messy filling inside the toy, so if it does break, the clean up shouldn’t be a difficult process. Ultimately, it’s usually worth the risk, because the toy is very cheap to purchase.

The Kong Wild Knots squeaker bears are some of our favorite toys, are they certainly do their job well.

There’s minimal stuffing used inside the toy, and it features an internal knotted rope that satisfies your dog’s desire to chew – while still being a fairly soft, plush, and durable toy.

Thanks to the improved strength, the toy is also capable of being used by medium and large breeds, although, like most squeaker toys, it may not fare well under intense chewing from powerful jaws.

Overall, these toys from Kong tick most of the boxes when it comes to engaging, durable squeaker toys, and most dogs certainly enjoy playing with them.

Our final suggestion is this fun Garfield squeak toy from Multi Pet.

Despite it being an ‘officially licensed’ Garfield product, it’s still a fairly well-constructed toy. If your dog isn’t much of a chewer, then this toy should cope well – but it may not survive in the jaws of a tough chewer – because the fabric is fairly thin.

Perhaps the best feature of the toy is the design, and in some respects, this is the main ‘stand-out’ feature rather than unrivaled durability and toughness. But overall, it’s a nice squeaker toy to own, and many smaller dogs will have fun playing with it.